The political discontent or malaise that typifies most modern democracies is mainly caused by the widely shared feeling that the political freedom of citizens to influence the development of their society and, related to this, their personal life, has become rather limited. We can only address this discontent when we rehabilitate politics, the deliberate, joint effort to give direction to society and to make the best of ourselves.

In Pluralism, Democracy and Political Knowledge, Hans Blokland examines this challenge via a critical appraisal of the pluralist conception of politics and democracy. This conception was formulated by, above all, Robert A. Dahl, one of the most important political scholars and democratic theorists of the last half century. Taking his work as the point of reference, this book not only provides an illuminating history of political science, told via Dahl and his critics. It also offers a revealing analysis as to what progress we have made in our thinking on pluralism and democracy, and what progress we could make, given the epistemological constraints of the social sciences.

Above and beyond this, the development and the problems of pluralism and democracy are explored in the context of the process of modernization. The author specifically discusses the extent to which individualization, differentiation and rationalization contribute to the current political malaise in those countries which adhere to a pluralist political system.

“… Blokland engages the “big issues” with confidence and skill, offering an informed interpretation of recent American political theories of democracy and pluralism and their sometimes contradictory implications. A deep and thoughtful analysis.” 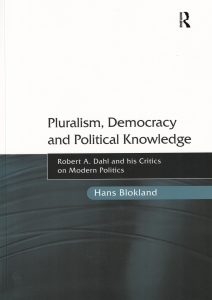 Increasingly the constitutional, legal, political and other devices by means of which people were traditionally supposed to ensure some influence over the shaping of their lives and their society – if only negative influence – are becoming inef­fective. This is not merely in the sense in which they have always been ineffecti­ve for the “labouring poor” in any but a trivial manner, but that they are increa­singly irrelevant to the actual machinery of technocratic and bureaucratized de­cision. ‘Politics’ are reduced to public relations and manipulations. Decisions as vital as war and peace not merely by-pass the official organs for them, but may be taken – by a handful of central bankers, by a president or prime minister with one or two backroom advisors, by an even less identifiable interlocking of technicians and executives – in ways which are not even formally open to political control.

The powers of ordinary men are circumscribed by the everyday worlds in which they live, yet even in these rounds of job, family, and neighborhood they often seem driven by forces they can neither understand nor govern. ‘Great changes’ are beyond their control, but affect their conduct and outlook none the less. The very framework of modern society confines them to projects not their own, but from every side, such changes now press upon the men and women of the mass society, who accordingly feel that they are without purpose in an epoch in which they are without power… But not all men are in this sense ordinary. As the means of information and of power are centralized, some men come to occupy positions in American society from which they can look down upon, so to speak, and by their decisions mightily affect, the everyday worlds of ordinary men and women.