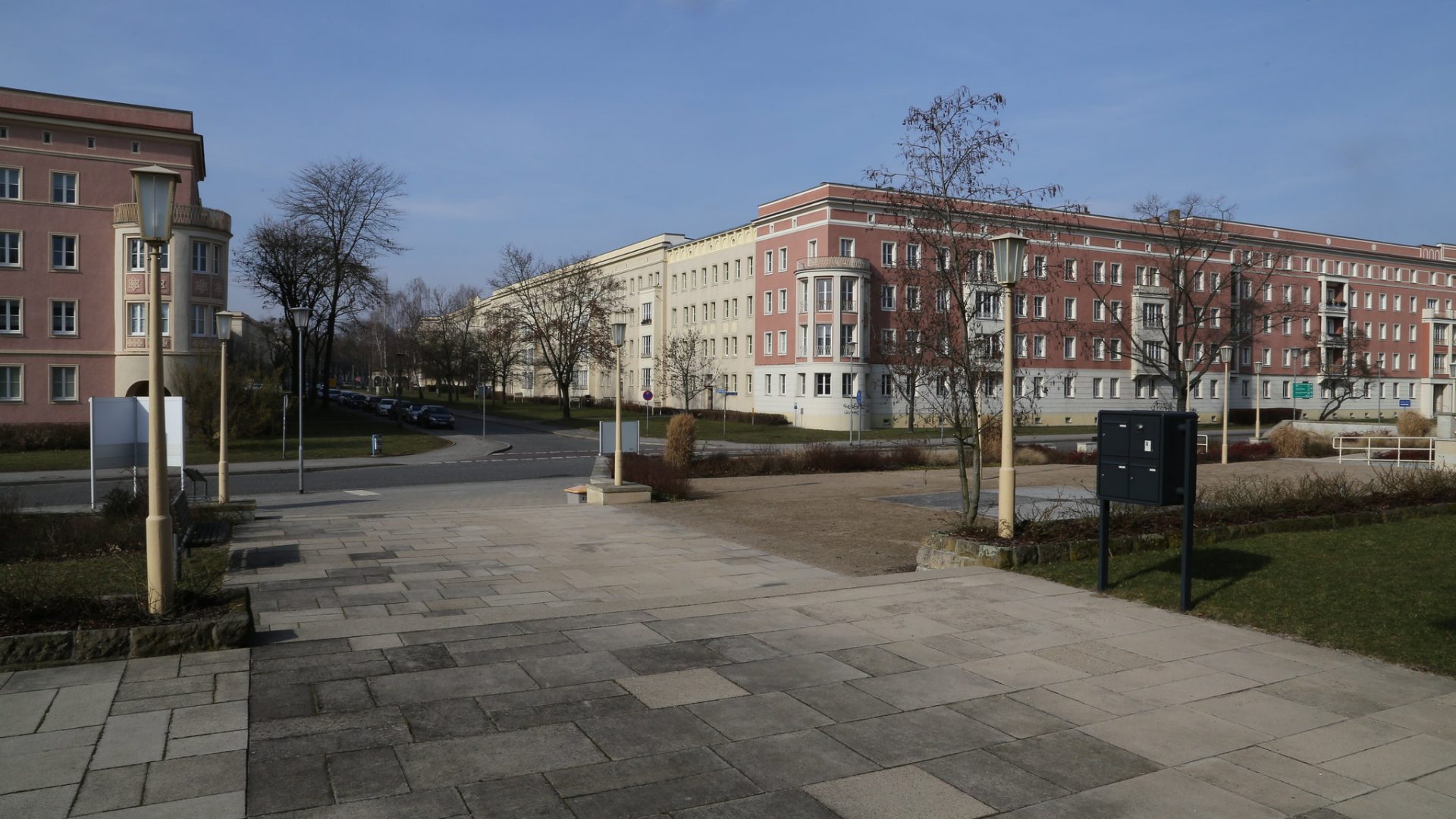 Planning a future together: Could Eisenhüttenstadt use some deliberative democracy?

Political communities occasionally come to crossroads where fundamental, far-reaching decisions must be made. At such times, it can enhance the democratic and substantive quality of decision-making if significant numbers of citizens are invited to participate in this process. By using the situation in the East German planning town of Eisenhüttenstadt, this idea will be illustrated here.

Shortly before the end of the war, Potsdam was heavily attacked by the British and American Airforce, a bombardment that destroyed an important part of the inner city. After the war, the authorities filled up the open spaces with modern DDR-architecture. After reunification, in 1992, the municipality decided to rebuild Potsdam as it had been before the war. The citizens were hardly involved in this decision. Since then, almost all buildings from the 1946 – I989 period have been demolished. With every demolition, many Potsdam-citizens of the former DDR felt humiliated and demeaned: even our buildings are not good enough. Many demolitions triggered severe protests and divides in the population. These are probably reaching their high point with the rebuilding of the 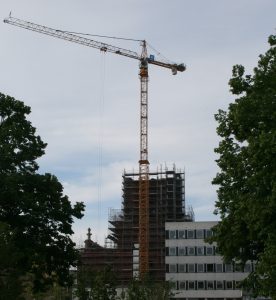 Garnisonkirche, the military church in which Adolf Hitler was inaugurated in 1933 by Reichspräsident Paul von Hindenburg.[1] For this project, one of the last remaining DDR-buildings, the Rechenzentrum, now temporarily used by the creative sector, in principle has to go. The resistance has become that severe though, that a very costly compromise seems unavoidable: The erection of the tower of the church will be completed, but the ship will probably not be realized. Instead, the Rechenzentrum will become the ship. Thus, a typical DDR-Plattenbau from 1971 will get a Baroque church tower from 1735 of 88 meter high.[2]

All this discord might have been prevented when the citizens of Potsdam had been offered the opportunity to participate in a meaningful way in the decision-making process.[3]

Towns and cities now and then have to make choices with wide and far-reaching consequences for its inhabitants. Already from a democratic perspective, the inhabitants should be invited to have a say in these choices: people that are directly affected by particular decisions have a right to participate in the decision-making process in question. On top of that, the participation of those who are affected by decisions, could importantly enhance the quality of these decisions: these people in particular have first-hand knowledge and experience about the living conditions the decision most likely is going to affect. This knowledge and experience should be tapped off. Besides, far-reaching decisions need a broad societal support to effectively implement the particular policies. This support can be broadened by involving the communities affected by the policies.

There is also a general motivation to involve citizens in the planning of projects in their neighborhoods: since the citizens are personally or directly affected by these projects, there is a higher change that they will participate. Their experiences in these local participations might heavily influence their general views on democracy, as well as further their political competences.

The story of Eisenhüttenstadt is well-known: planned and built in the fifties out of nothing around a new steel mill combine, growing fast from 2400 inhabitants in 1953 to almost 54.000 in 1989, and since then steadily declining to 23.000 in 2020. This decline will continue, taking into consideration the demographics of Eisenhüttenstadt. Telling are the developments in the numbers of newborns and deceased. In 1970, 813 newborns were counted (18 per 1000 inhabitants), a number bit by bit declining to 158 in 2018 (6 per 1000 inhabitants). In the same time period, the number of deceased went up from 328 to 472 (from 7 to 18 per 1000 inhabitants).[4] In the beginning of 2019, there were more people older than 75, than people younger than 25 in Eisenhüttenstadt, and about half of the population was older than 55.[5]

What is the future of Eisenhüttenstadt? Has the town a future, or only a past? The town was a model town, thoroughly planned in

every facet of life. Does the town, on top of the already existing plans, need a new comprehensive plan, or should it just watch how a multitude of small decisions of individual citizens will bring about a collective decision? What could the contributions of average citizens be in the development of such a plan? How do the people living in Eisenhüttenstadt see its future? How do they define its “identity”? What would they like to be improved to make live more attractive? What need to be changed to convince young people to stay or to come? Does Eisenhüttenstadt need more young people, or would it be an option to invite even more senior citizens to come (back) to Eisenhüttenstadt and to enable them to enjoy old age together?

It seems, there is enough to talk about. To make these talks informative, democratic and productive we could organize deliberations of larger numbers of citizens. These deliberations could take many different forms, depending on the goals of the deliberation, the number of people one would like to participate, the thoroughness of their exchanges, the time span taken for these deliberations, the number of institutions involved in the exchanges and the sought-after outcomes of the process.

An example of a deliberation

Just to stir the imagination, we have a look at a deliberation that took place in Philadelphia (USA) in 2003.[6] This city did not have any tradition of citizen involvement of city planning but wanted to make a change. The topic was what to do with the central waterfront along the Delaware River. For a period of 50 days in total about 800 citizens engaged in a public dialogue, organized around four meetings.

At the first meeting, different experts basically presented information about the issues at stake, ensuring that there was a common base of knowledge for the public deliberation. This information was also published by the newspaper and on the website that was especially created for the project. The local newspaper played an important role in the entire process, continuously reporting about the dialogues, the agenda, the issues at stake, the alternatives, the different viewpoints, the discussions and the conclusions.

The second meeting was meant to develop some leading principles for the development of the waterfront. The citizens that attended the meeting participants were randomly divided into ten small groups, each chaired by a trained moderator. They discussed who was using the waterfront, how these people used it, what hampered people to use it, how the participants would prefer to use it and on which principles the front should be developed, considering these actual and possible uses. The participants came up with principles like “make the river the focal point of the identity of Philadelphia”, “make it easy to reach”, “make it affordable and sustainable” and “keep it a public space”.

On the basis of these principles and the expert input of the first meeting, three different teams composed of architects, planners, engineers, economists, artists, and social and political scientists explored, at a third meeting, a design approach for the waterfront, that assigned different weights to the principles. These alternatives were also published in the newspaper and on the website.

At the fourth and last meeting, involving 350 citizens, small groups were again randomly selected. The groups discussed the three proposals and at the end every member rated each proposal. The cumulative ratings were then presented and discussed in the plenary meeting. A poll was also implemented by the newspaper under its subscribers. 5000 people participated in this. The end results of the entire deliberative process informed the formal decision making. It also created the expectation that citizens should be involved in the design of the public realm. Therefore, after this first experiment, regular public deliberations followed.

In case the local government would organize a deliberation on the future of Eisenhüttenstadt, several questions need to be answered first: what is exactly the problem we want to talk about with citizens? How many and what kind of citizens would we like to participate

in the talks for how long and how will these citizens be motivated to attend? How will the content of the discussions be given substance (open agenda or expert-informed alternatives)? What kind of outcome is sought for: a decision or an advice (for whom)? How concrete should the outcome be (a vote on several alternatives, an overview of concerns)? Which partners are available to build up and implement the deliberation (news media, interest groups, civil society organizations)?

These questions already indicate that there are many different options for shaping citizen participation in decision-making. Which form of participation is most appropriate depends on the problem or issue in question, and on local conditions and possibilities. There are no unambiguous answers, just as there is no finite, universal, unchangeable definition of democracy. What does seem clear, however, is that the time is ripe for trying out new forms of democracy. For that matter, what does one have to lose in a place like Eisenhüttenstadt?