Freedom and Culture in Western Society

Freedom has become a dogma. This value forms the basis of our civilization and of our political consciousness, but often we have forgotten its meaning and justification. Critically examining the conceptions of freedom of some of the leading contemporary philosophers from Isaiah Berlin to Charles Taylor, Hans Blokland explores the value and significance that freedom has acquired in our political consciousness.

On a theoretical level, Blokland shows that it is possible to have a reasonable discussion on the meaning of contested concepts such as freedom and autonomy. Crucially, he investi­gates how politi­cal com­mun­ities could enlarge the capacity of their citizens to master their own lives, without unac­ceptable interfe­rence in their private realm. Because the ability to par­ticipate in culture is regarded as one of the import­ant condi­tions for individual freed­om, in this context parti­cu­lar attention is devoted to the legitima­tion, as well as the opportu­ni­ties and bounds, of a cul­tural policy.

The book breaks new ground because it does not only deal with the question of what we can know about the meaning of con­cepts like freedom or auton­omy, but also of what we can do to foster their realisation. In this manner it is attempted to bridge the gap between social and political philos­ophy on the one hand, and empirical social and political science on the other. Generally, both disciplin­ary streams do hardly ever meet. As a conse­quence, the results are often either norma­tive the­ories without practical mean­ing or empirical theories with­out depth and direc­tion.

First published in Dutch, this book was awarded the Pieter de la Court prize by the Royal Netherlands Academy of Arts and Sciences and the Political Science prize by the Netherlands Politi­cal Science Association. It has been extensively updated to include material from the United States, Great Britain, France and Sweden as well as from The Netherlands. 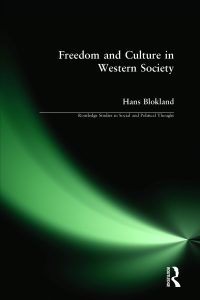 It may be that, without the pressure of social forces, political ideas are stillborn: what is certain is that these forces, unless they clothe them­selves in ideas, remain blind and undirected.

A nation is not civilized because a handful of its members are successful in acquiring large sums of money and in persuading their fellows that a catastro­phe will occur if they do not acqui­re it.. What matters to a socie­ty is less what it owns than what it is and how it uses its possessions. It is civilized in so far as its conduct is guided by a just appreciation of spiritual ends, in so far as it uses its material resources to promote the dignity and refinement of the individual human beings who compose it.

As our traditional objectives are gradually fulfilled, and society beco­mes more social-democratic with the passing of the old injusti­ces, we shall turn our atten­tion increasingly to other, and in the long run more impor­tant, spheres – of personal freedom, happiness, and cultural endeavour: the cultivation of leisure, beauty, grace, gaiety, excitement, and of all the proper pur­suits, whether eleva­ted, vulgar, or eccentric, which contribute to the varied fabric of a full private and family life… We do not want to enter the age of abundance, only to find that we have lost the values which might teach us how to enjoy it.