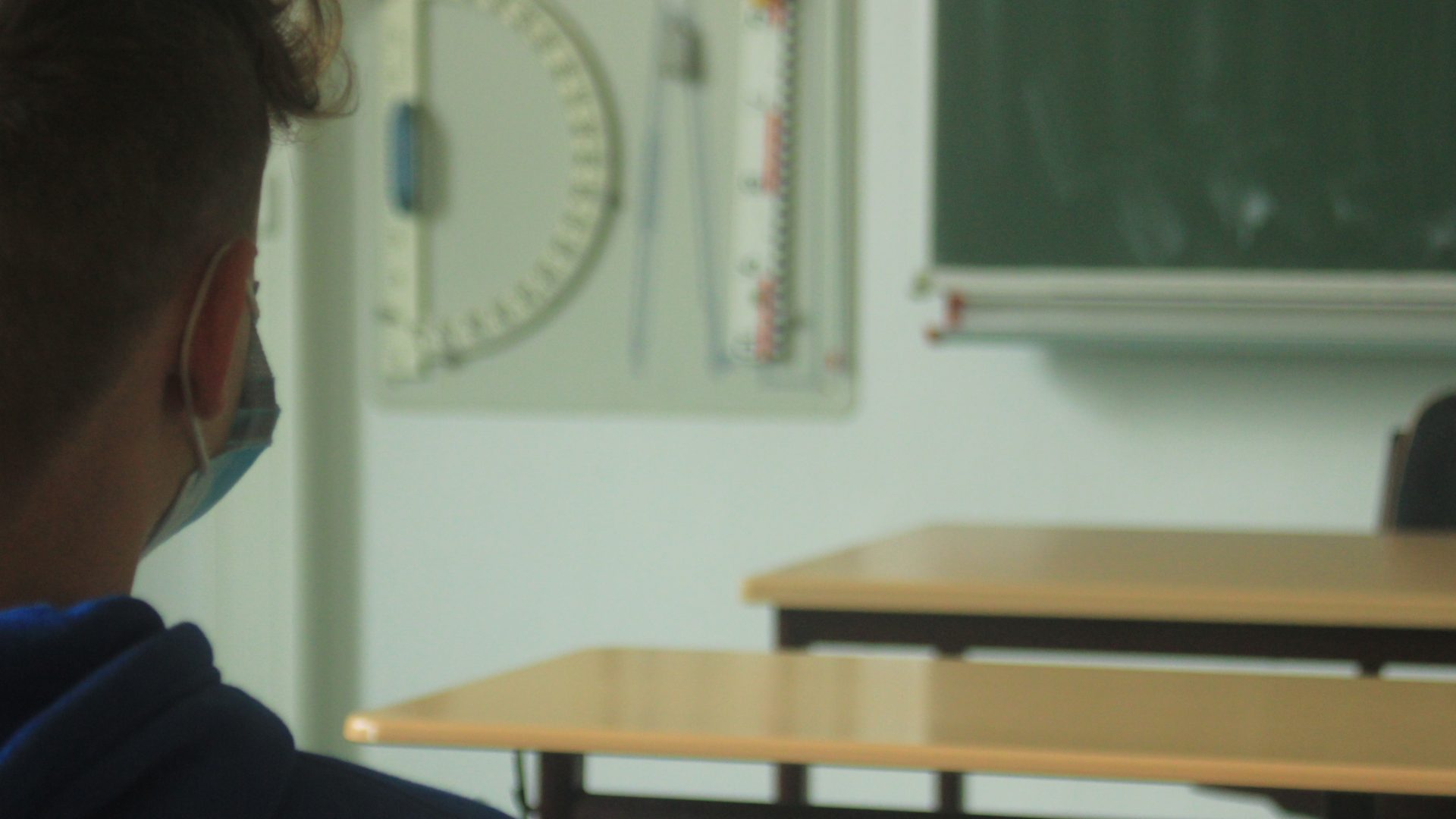 Talking straight to youngsters in Hamburg

We are in a less affluent part from Hamburg for a two-day Workshop. About 70% of our 32 participants have a migration background. We talk for about 10 hours with two different groups of about 15 kids between 15 and 17 that volunteered to participate. Probably, they did not only volunteer because they were very interested to discuss democracy, discrimination, sex equality or homosexuality, but also because they were less motivated to follow their regular classes.

On both days and especially in the morning many kids have trouble to stay awake and to keep concentrated. Six or seven children do not say a word for two days, stare right through anybody and anything and show so little facial emotion, that we wonder whether they are under the influence of drugs. When we address them directly, trying to lure them into the discussion by asking about their thoughts, they show no sign of awareness what the discussion has been about, or even where they are. The youth workers that are present believe, or hope, it is mainly puberty. During most of the morning many kids of this age are simply not able to concentrate on anything.[1] The first couple of hours at school are usually lost time.

When we deliberate after lunch it seems as if many children have a form of ADHD. They just cannot sit still for more than 10 minutes. They wonder around the room to get food or drinks, to throw things away or to simply talk to somebody. It’s because it is the afternoon, the teachers explain. In the morning they are still asleep, in the afternoon they got to move.

We ask ourselves whether one should even try to teach before 11 AM at secondary schools. And is the kind of education offered by most (German) schools – sitting with 30 kids in a class room and listening to a teacher – up to modern pedagogical standards? This particular school already made important changes (instead of 8 AM they now start at 8.30 AM and new possibilities have been introduced for counseling and alternative ways of learning), but the entire system still has a long way to go.

The kids also have difficulty listening to each other. The groups are composed from four different classes. The students from each class sit together. When somebody is talking, the kids of other classes start exchanges among themselves over and over again. The ideas of people of other groups are not relevant to them, it seems. This behavior only stops a bit after we have announced to split up the groups, if necessary.

Listening to each other, respecting each other, learning from each other, are activities that need to be learned, and at best as early as possible. The same goes for the ability to think for oneself, formulate and to express opinions of oneself, to exchange with others in respectful ways, and to build up understanding and consensus instead of discord. Many kids in this school do not seem to have much training in, or experience with this.

One of the topics we discuss is sex equality. In the discussion the general opinion, also that of the girls, is that women are less rational and organized than men. They are also less able to manage and to govern. Other than most women, men can make clear and harsh decisions. Men are more confident and have less fear to take responsibility. Therefore, they are also more dominant and convincing than women. When a man takes a decision, people listen and comply. His sole appearance and presence are worthy of respect. When a woman takes a decision, one knows there is still room for negotiation. Men are simply more respected. Men will also not take orders from women easily. The consensus is, that as a company, one wants to have a majority of men at the top taking decisions and doing the negotiations.

Connected to this, the feeling of those actively participating in the discussion is that there are professions that are typical female, particularly those related to caring und nursing. Concomitantly, there are archetypal male professions, especially those that have to do with building and engineering. Because women are more emotional, less rational and have fewer leadership abilities, it is also logical that women are way less represented at the top of private and public organizations, as well as in politics. This inequality does not constitute a problem in need of repairs, it is just the way it is. As long as the men are doing their job fine, there is no need to change anything. Women also do not want to get at top positions. Women should of course have the opportunity to become a bricklayer or a manager, but when they do not want to, as is obviously the case, they should not be forced into these professions and positions.

Most of these thoughts are also shared by the girls. Just one girl, the only one wearing a headscarf, protests violently. Remarkable are not just the opinions in itself, but the individualist or neo-liberal worldview underneath: the world as it is, is the result of free, personal decisions and choices. When there are no women at the top of organizations or in particular professions, then apparently women have made the choice not to be there. Sociological insights about the workings of socialization, discrimination and power are basically absent. As we noted in many other contexts before (for instance, in discussions on social inequality), pointing to these workings, nowadays does not define one as a sociologist, but as a socialist. And socialism, as we all know, is bad.

This hyper-individualism is illustrated by the responses the participants gave to the statements in the survey we previously asked the kids to fill in. A stunning 33% “totally agreed” and 23% “agreed” for instance with the statement “People are responsible for their own wellbeing”. Nobody answered not to agree at all, and only 7% “disagreed”. For the people thriving the most in the current social-economic constellation, it must be a relief to hear, that those at the bottom of our society mostly blame themselves for their disadvantaged position.

The other opinions expressed in the workshop were to a high extent also confirmed in the survey. One of the questions in this survey is, “There are professions which should only be done by men or women “. Of the 30 respondents 17% “totally agreed”, 23% “agreed”, 27% was undecided, 17% “disagreed” and 16% “totally disagreed”.

Nevertheless, 70% of the respondents “totally agreed” with the statement “Women should have the same rights as men”. Still, 20% “totally disagreed”.

One of topics we discussed in the context of discrimination is racism. Obviously, an important question to be answered here is whether there are any human “races” at all. Considering Germany’s past, one might expect that this issue is addressed sufficiently at German schools. Apparently not. The students that are most outspoken defend the position that different human races exist and that they have different qualities. They know about Darwin and natural selection and they believe that this selection process has also happened with humans. People living on the Equator have a dark skin because there is more sun. “Africans” run faster and jump higher by nature (why would that be?) and are consequently more successful in basketball. Any sociological explanation for the overrepresentation of particular groups in particular sports or other activities seems new for them. Luring in the background is all the time whether this “natural selection” has also caused other differences than the ones that are observable (skin, hair, eyes, height, or whatever). Are particular human races also more “intelligent” or do they have other “values”? There is an awareness that it is not appropriate to assume this, but the students that express themselves are not able to explain why this is the case.[2]

The mood of the discussion we find back in the replies to the survey question “Different racial groups have inherited different capacities“. 27% “totally agrees” and 17% “agrees” with this statement. Only 16% disagrees. 40% is indecisive.

Another topic we addressed was homosexuality. Homophobia seems to be on the rise among youngsters, especially boys (see also here). Part of the explanation might be the growing uncertainty about being “a man”. To make clear one is a real man, boys feel the need to distance themselves from homosexuals that are considered to be “womanish”, “swishy” or “femme” (French men are, as we all know, sissies and namby-pambies) and so, weak.

The recent empirical study of the Friedrich Ebert Stiftung, Verlorene Mitte: Feindliche Zustände (April 2019), also finds that in the cohort 16 to 30 years the aversion against homosexuality is double as high as in the cohort 30 to 60 (13% respectively 6%). Young people have comparable scores as the people older than 60 when they are asked whether they consider homosexuality “immoral” or whether they have feelings of “awkwardness” when they see homosexuals kissing in public (2019: 68, 72, 89). Men (11.3%) are also more often negative about homosexuals than women (8%) (2019: 89).

The opinions on homosexuality in our group were indeed not really positive, to say the least. 23% of the kids completely agreed and 10 % agreed with the statement “Homosexuality is an illness”. Two of the respondents (two boys) added a category “6” to stress that “completely agree” (5) was not strong enough to express their feelings. 27% did not know and 37% completely disagreed. 8 of the 20 boys were of the (strong) opinion that homosexuality was a disease, 6 disagreed and 6 were indecisive. 2 of the 10 girls also saw homosexuality as a disease, three did not know.

30% completely disagreed and 13% disagreed with the statement “A homosexual couple has the ability to raise children.” 20% was indecisive.

18% of the respondents completely agreed and 11% agreed with the statement “Homosexuality can be cured”. 46% completely disagreed.

Did these adolescents like to deliberate on topics like democracy, sex equality, discrimination, racism and homosexuality? Despite their troubles to stay focused, to listen to each other and despite the awkwardness of some of the discussed topics, their feedback forms were rather positive. Often, we are afraid that our respondents are just awfully polite people, but these wonderful kids were not really polite. We appreciated their directness.

83% (completely) agreed with the statement „The most important points on each topic were dealt with in the group discussions“.

72% (completely) agreed with the statement “I’ve found that people with different views often had very good reasons for their views”.

67% (completely) agreed with the statement “I believe that I have developed a better understanding of some subjects”.

61% (completely) agreed with the statement “I believe that I have developed a better understanding of how certain topics are related”.

44% agreed and 28% „completely agreed“ with the statement „I would like to participate in a program like this again”. Only 2% gave a negative answer.

Consequently, when it comes to the motivation of our kids in Hamburg, there is much room to get in fruitful exchanges on fundamental themes. Considering some of the currently held positions, we should make use of this motivation.

*Thanks to Florentin Münstermann for his comments on an earlier version of this article and for his analysis of the survey.

[1] Young children are early birds, whereas children in their puberty only get awake late in the morning. https://www.theguardian.com/education/2016/jul/01/wondering-why-you-cant-concentrate-it-might-be-your-body-clock

[2] “The popular classifications of race are based chiefly on skin color, with other relevant features including height, eyes, and hair. Though these physical differences may appear, on a superficial level, to be very dramatic, they are determined by only a minute portion of the genome: we as a species have been estimated to share 99.9% of our DNA with each other. The few differences that do exist reflect differences in environments and external factors, not core biology.” Chou, Vivian 2017 How Science and Genetics are Reshaping the Race Debate of the 21st Century April 17, 2017. Science in the News. Harvard University.